The youngest of our three children, Sawyer, had just turned eight when he started loosing weight, complaining of stomach aches and feeling exhausted. We knew he had allergies and had been checking in with his pediatrician. At a follow up visit she checked his urine, then did a finger stick for blood and sent us directly to the hospital.

Sawyer was diagnosed with Type 1 Diabetes and life as we knew it was forever changed.

As a family we learned how to count every carbohydrate, calculate carb to insulin ratios and how to stick a finger to test Sawyer’s CBG (capillary blood glucose). The days blurred with 5-8 tests followed by insulin injections into his arm/leg/abdomen. His fingers soon became calloused from so many finger sticks, his body bruised by the injections. As his mother I begged the universe to let us trade places. He deserved a healthy carefree childhood.

We soon fell into a routine of functioning as Sawyer’s pancreas, working full time jobs and encouraging our children to live active and fully engaged lives. This meant academics, athletics, scouts, music and work for our eldest. My husband and I juggled blood sugar testing, insulin dosing, swim meets, running a small business and keeping a busy private midwifery practice thriving. We kept up this pace for the first year of Sawyer’s diagnosis.

Ken and I also realized that chronic illness management was financially draining. It was incredibly stressful! Sawyer’s hospitalization totaled more than $45,000.00 of which, we were responsible for 20%. We were also shocked and worried about the costs for insulin and supplies totaling more than $600.00/month. We were ill prepared for the increased financial drain of keeping our son alive and we had good insurance. Ken and I would look at each other and ask “How the f#$@ are we going to pay for this?”

I told myself, “At least I am a health care professional and know about the disease,” and even, “I was trained for this.” No one can ever train you to watch your child endure the management of a lifelong chronic disease and the stress that it puts on a family. I felt the drain of feeling very responsible for Sawyer’s disease management and his response to his “new normal” life. I carried a pager for my work and for Sawyer. My husband, Ken, and I added new codes to indicate he needed urgent (911) or non-urgent (411) diabetes information from me. I was NEVER without my pager. There were moments I would be attending a birth and I needed the nurses to answer my 411 page and relay information to Ken for me. It was multitasking on steroids.

I soon learned that there might be limits to being a working mum. I was physically and emotionally drained but felt the need to just keep moving. Taking one minute then the next, looking long term was terrifying. I put one foot in front of the other for if I stopped I feared collapse.

Our family was learning about survival and resilience. Resilience is defined as the ability to thrive despite adversity.

Drug companies are eager to tell us about illness and that many diseases affect your immune system. We used to play the game of “what are they selling us?” when commercials came onto the TV. As a parent, I told myself, “if we are going to have the TV on, maybe we can add in a little education.” We also learned that diabetes will compromise one’s immune system. Sawyer worried about every sniffle. Honestly, we all did at first. Illness changes how much insulin one needs and can be life threatening to a newly diagnosed diabetic. This was scary stuff and it was hard not to let the fear completely envelop our existence. Our family was learning how to define Sawyer’s disease. Each time he survived the usual childhood ills, we cheered on his body’s inherent strength and resiliency, his immune system. We often still refer to him as “the Diabetic Wonder.”

Sawyer learned how he would co-exist with a chronic disease. As with so much in life, he had choices. He could choose to be known by and defined by his disease OR he could focus first on all of his other wonderful qualities (quirky sense of humor, award winning pinewood derby car, soccer, math prowess). I am grateful he chose the latter.

Several months into the diagnosis Sawyer stated matter-of-factly, “Mom, you give horrible injections!”

“What? I am a trained professional?” I boasted.

“I want to give my own shots,” he quipped.

Really? Was it all right to let an eight year old do this? Ken, Sawyer and I discussed it and that evening he learned how to give himself shots. An adult would still be responsible for insulin/carb calculation and drawing up of the insulin, he would administer the injections. From that day forward, we only gave injections if he needed one in the middle of the night while sleeping.

One day we were going through the process and I noticed he seemed to be mumbling to himself a bit before injecting his insulin. It looked like he was coaching himself. With tears in my eyes, I asked if he was scarred about it hurting. After all his abdomen and thighs were always covered in bruises. Needles hurt. After finishing his injection, he turned to me and held my hands. He looked sympathetically into my teary eyes and said, “Don’t worry Mama, all I have to do is think about flowers and daisies and it is all ok.” His sage strategy immediately allayed my worries and was a powerful message of his strength and of his resilience. 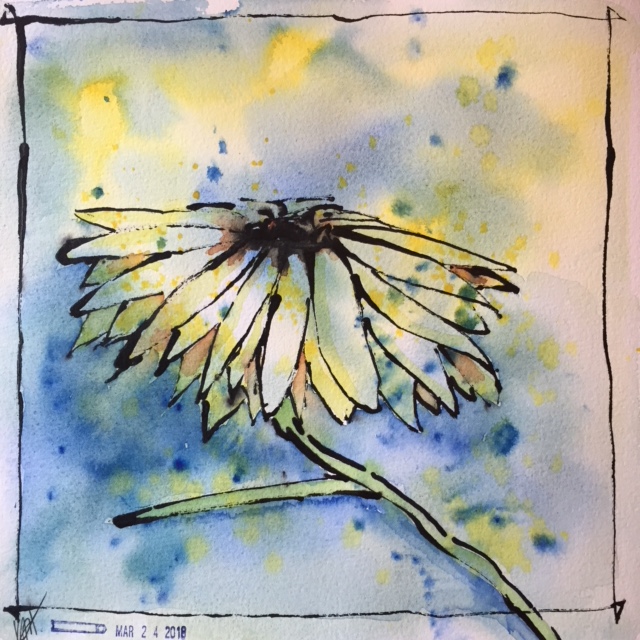 It has been over 13 years since Sawyer’s diagnosis. We have learned a great deal about resilience as a family. Whether one has diabetes, Parkinson’s disease, cancer, crooked teeth or a bad hair day we have a choice about how we look at it. Those challenges can define us, or we can take a deep breath, think of “flowers and daisies” then put one foot in front of the other.

6 thoughts on “Flowers and Daisies”

This site uses Akismet to reduce spam. Learn how your comment data is processed.

Shaking and Baking: finding laughter through tears with my diagnosis of Parkinson’s disease